it's easy for you to say

Today's blog is going to cover emotional and mental abuse and some of my experiences, so trigger warning, if you need it. 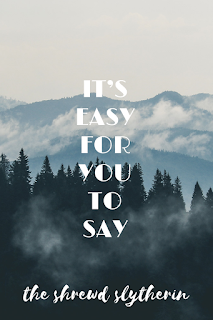 I'm currently in a class called Sociology of Deviance. It's a great class. I love it. But, these past two weeks, we've been covering domestic violence situations, be it physical, mental, financial, etc. abuse. It's been difficult for me because, well, I've been in an emotionally and mentally abusive relationship for about four years of my life. I don't talk about it publically very often because I still have many problems that stem from being subject to this abuse for so long.

So, in class yesterday, we were discussing a portion of the book we are reading dealing with a woman's story of her abuse by her first husband, we came across a portion where the woman, Leslie, was crying in bed, hoping that her partner would realise that he had made her very upset, wrap his arms around her, and comfort her. He never did and the next morning, he complained that her crying had kept him up the previous night and to "not do it again." In the subsequent discussion of that scene, one woman in the class spoke up and said, "If that was my husband, and he let me cry in our bed without saying or doing anything, that would be the last night I'd spend in bed with him."

And I sat there thinking, boy, that must be easy for you to say. It must be easy to think "Oh, I'd just leave," or "that's unacceptable," looking in from the outside. It must be easy to say, "I would never let that happen to me." And I know how easy it is to say those things. Because when I was younger and hadn't been through what I've now dealt with, I used to say the same things. They were so easy to say because I didn't understand the way abusers work and manipulate. I didn't understand how far I would go to try and save a relationship that was so toxic because I believed that things would change no matter how many times I was blatantly proven wrong. I didn't understand the emotional and mental grip my partner would have on me that broke all my willpower and made me feel small enough with a word or look that I felt as if I could fit into a thimble. I didn't understand that anyone can be a victim.

As with the author of the book who cried in her bed, I cannot tell you how many nights I spent crying in our bed, on our couch, on the phone, with nothing but anger or annoyance coming from my partner. I couldn't tell you how many times I was treated like my feelings didn't matter and were a complete burden on the other person or how many times I convinced myself that he'd care next time as I was laying on the floor of my closet because it was the only place where I felt I could find solace, curled up underneath all my sweaters. It was because I loved him and couldn't compute the fact that he didn't have the same love towards me. We were partners. We had promised to love each other no matter what. People didn't do this to the people they love, but he was just having a bad day or work must have been stressful or traffic was frustrating or any other justification he (or I) came up with for the emotional manipulation and coercion.

There was a night when I had a panic attack that was so bad that I passed out and came within two inches of hitting my temple on the sharp corner of the bed. I could have been extremely injured. I was too weak to get up off of the floor. My legs were collapsing underneath me every time I tried again to get up. I tried calling and calling my partner and at first, the phone would ring and ring, and then go to voicemail. Suddenly, it wasn't ringing anymore. Just going straight to voicemail. I messaged the friend I knew he was with and asked him to have my partner call me because I really needed help at home and I was so scared and the friend messaged back saying, "Nah, no can do." My mother even messaged him on Facebook begging him to go to our apartment and check on me because she was 750 miles away in Utah and couldn't come to check on me herself. He read the message, didn't reply, and definitely didn't come home. I laid on the floor for four hours on the phone with my parents in the middle of the night, keeping them up, hundreds of miles away because they were the only people I had.

Stop asking why people stay. Stop saying "I would never let that happen to me." Stop judging victims of abuse and blaming them for their situations. Instead, you should be asking, "What causes this person to abuse their significant other or family members?" or "Why does this person believe their abuse is acceptable behavior?" It's not the victim's fault. They have been so coerced and manipulated slowly, over enough time that they don't realize it's happening.

To further explain these points, here is a TED talk by the woman who wrote the book I am currently reading in class speaking about her abuse and not being considered a "typical victim of abuse."

Remember, it's easy to say it when you haven't lived it.
Labels: trauma understanding others women
Location: Norman, OK, USA 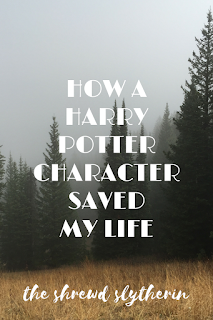 how a harry potter character saved my life 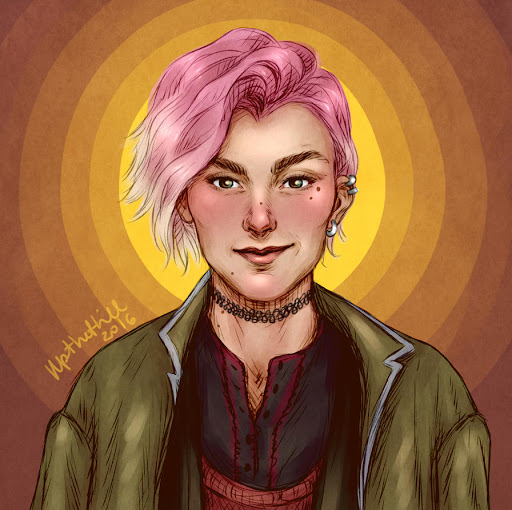 the powerful women of harry potter

Xandie is a 24-year-old Harry Potter and cat aficionado.
She's here to write about her experiences in hopes that they can help other people.
Currently living in Norman, OK.